From winter to spring!

It is still February and not only are the days getting lighter, they are also getting longer. On clear days, the daylight sum (the total amount of daylight plants are exposed to) increases on a daily basis. This means that Phalaenopsis seedlings should already be protected by applying chalk. Some growers already started this in Week 6 or 7, but with a dosage that is half the regular dosage at most. In general, one can say that applying chalk as a standard procedure eliminates 50% of the light at minimum.

This is usually applied in the last week of February/early March. It is sort of an ‘all or nothing’ method. It is precisely in Week 6 / 7 that the ingress of light in daytime is already high (or too high) and the screening cloths will have to offer sufficient protection. Particularly in intermittent weather conditions, climate control can be activated too late, resulting in the plants being exposed to high peaks of light which can, in turn, cause leaf burn. This is particularly true when the weather has been cloudy for a few days and suddenly turns clear and sunny. In cases like this the change can be too abrupt.

This has been the reason for some growers to start applying chalk two to three weeks earlier in comparison to Week 9 (as was previously the case), but not as heavily. Depending on the weather conditions in February and March the chalk layer may have become thinner resulting from rain, snow and/or hail. This means that a second layer must be applied at the end of March. After applying chalk, the screen settings MUST be adjusted to prevent the greenhouse from becoming too dark after the chalk is applied. In this case, the cure is worse than the illness.

If you want to do this well, you will need to examine your screen settings once a week. Until the longest day there is an increase, and after the longest day a decrease. Keeping an eye on this on a weekly basis is something growers tend to forget. A simple check can be performed: if you start squinting because it is too light, the light level is approximately 10,000 lux in natural light (= 180 micromoles). 10,000 lux in artificial light (SON-T) is approx.120 micromoles. A PAR meter in the greenhouse provides continuous insight into the level of lighting. 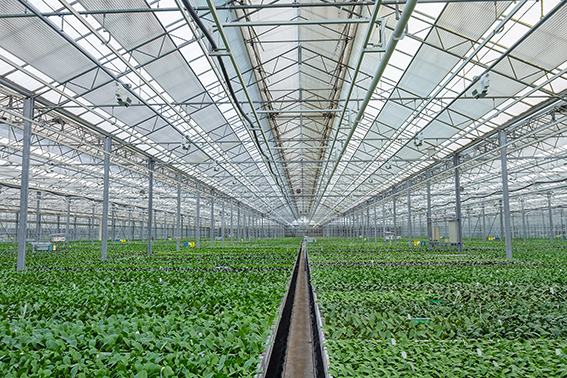 Another factor to take into consideration in the next period is the various daylight sums from day to day. When the weather is fine (6 moles or higher the plants use the malate much faster and will start to absorb carbon dioxide early in the day. This can be discerned by seeing if the leaves are becoming limp. If it is darker the next day (i.e. there is less light available) not all the malate will be broken down, and this will result in a type of leaf burn. This effect increases in April and May. This can be seen more strongly in certain varieties when the young plants are moved to a darker spot before the afternoon. This happens as soon as they are placed on a trolley. The plants that grow in the darkest place suffer the most damage.

This also happens to very specific varieties if they are wrapped before the afternoon and moved to a trolley or truck. Plants with a high malate content are very sensitive to handling. Once again, this is more strongly apparent if we get a day with very little sunlight immediately following a day of very fine, sunny weather and/or if plants are moved to a darker spot too early. It is worth considering the possibility of increasing the light sums only gradually so that the differences from day to day do not become too big during the next few months to come.

Nothing could be less true than the idea that humidity has no impact on all the above. It is a highly neglected and underestimated factor. Starting from this period until mid-May, humidity outdoors can be extremely low on sunny days. Therefore, a slight opening of the ventilation system can have quite a large impact on the relative humidity. This effect is reinforced by increasing exposure to light. In principle, a relative humidity between 60 and 70% is good, but it must be taken into consideration that when temperatures increase, so does the relative humidity. This applies to more light as well.

In other words, at a temperature of 28°C and 150 micromoles of light, a relative humidity of 70% is better than 60%. If it becomes warmer or lighter, 75% is even better. This is related to the VPD (Vapour Pressure Deficit), or the difference in vapour pressure in and outside of the leaf. Additionally, the misting system can be set to a higher level during this time of the year, while you should apply the reverse strategy after the longest day when there is more moisture in the outside air. Also, decreasing the level of ventilation and/or narrowing the opening of the transparent screen will also improve the climate.

To put it briefly, if you are in a greenhouse where Phalaenopsis seedlings are being grown, you should perspire a little bit.

Potworms remain a significant problem. We are still waiting for an adequate solution, but the possibilities are only limited at this moment. Research is still being conducted and it appears that a breakthrough is being made in luring the mosquito in combination with capturing lights. The first concerns a combination of keeping the substrate on the dry side, mainly during the first eight weeks. This means giving the plants sufficient water, but allowing the substrate to dry well afterwards. The combination of coarse substrates that remain wet is worst. Therefore, a little too dry is better. This will cause the roots to grow deeply into the plug in search of water. This is the best solution. This works particularly well when combined with putting out Hypoaspis miles. The speed at which the plants grow will be limited in the beginning, but we have noted that after these eight weeks, when the plants have rooted well and get more water, they demonstrate a growth spurt. Of course, this does not compensate for the delay, but it makes potworm manageable, causes less damage and does not induce you to start treating your plants with chemicals. We have also noticed less impact caused by potworms in wet yet compact substrates, but most growers do not prefer to use these. It is, after all, against the nature of an epiphyte.

Continue to scout meticulously for trips. This problem has been increasing in the past few years. It affects the plants not only when full-grown and in flower, but also at the seedling stage.

This fungus has reappeared after we thought it had been eradicated. A tried and true remedy is to apply Ortiva immediately after transferring the plants to pots. If you have Leucocoprinus-ridden plants in pots, you will need an action plan to eradicate this fungus. This means thoroughly cleaning the tables on which the plants rife with this fungus have stood. This is particularly important if you have noticed golden yellow mushrooms with a pleated cap. Start with clean material on clean tables and clean the tables you have used with a disinfectant. 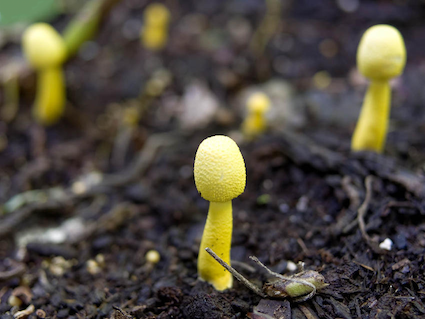 Now that the weather is becoming sunnier and the climate dryer, the risk of spider mites is increasing, particularly in the cultivation of Cymbidium. Of course, you know which varieties and spots in your greenhouse are first affected by spider mites. Scout frequently and start applying biological pest control in time. Growers who have been using biological pest control for several years have noticed that it becomes easier every year in comparison to when they first started. It takes at least two seasons before you get the feeling/idea that biological pest control is a good alternative. If not, you will need to apply chemicals. In both cases, it is imperative that you continue to inspect/scout everywhere. If you encounter slugs or snails, start eradicating them as soon as the weather turns warmer. You can start at the end of March or beginning of April, depending on the weather conditions outdoors. A great help in eliminating slugs and snails is ensuring that the area around and near the plants is clean (i.e. free of weeds and leaf remnants).

You have probably already applied chalk for the late batch. Depending on the weather conditions and how much chalk is left on the roof, you may need to repeat this in April to keep the daytime temperature sufficiently low.

The early Cymbidium batch, which should flower before 1 November (Week 40 and later) should be exposed to an average daytime temperature of 20°C by now. If the spring is mild and sunny, we will hardly have to do anything. However, considering that March may come in like a lion but go out like a lamb, you should also take into account colder weather in this month. This means heating. Make sure that the relative humidity is adequate, because warm and dry air will also impede the growth of Cymbidium orchids. If you use AC foil in these sections, be sure to apply sufficient ventilation to allow the moist air to escape. Depending on the weather conditions, the screen can be opened during the course of the month of March, and even removed entirely.